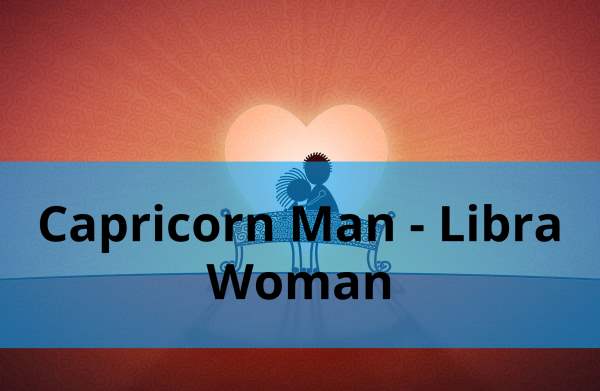 What an encounter. The Capricorn man and the Libra woman are very different, but this will not prevent them from living a fantastic love story. Yes, both will have to make sacrifices.

From their first encounters, the Capricorn man is seduced by the charming Libra. He loves her refinement in the way she dresses, her mental acuity, her naturalness. It should also be said that the Libra woman knows very well how to treat men. She likes to seduce, and above all, to feel that her charm works, even with the complicated Capricorn. Attracted by his sincerity and masculinity, she easily lets herself get swept away into his arms.

Together, therefore, they will share excellent moments. She brings the passion that she is known for, and he, a little more moderate, brings a certain calm and balance to the relationship. Things will get complicated later on.

Mr. Capricorn values love very much. Sometimes he may feel troubled or even disappointed by his partner, whose need to seduce usually prevails over her need have a harmonious relationship. Committed, loyal, sincere in his feelings, the Capricorn man will usually have great difficulty in accepting this attitude, especially if he sees that Libra does not make an effort to correct it. Over time, this can become a source of recurring conflict between the two.

Another point of conflict may be that the Capricorn man focuses excessively on his professional activity. Determined and ambitious, he's sometimes willing to do anything to achieve a certain social or professional status, which can certainly be a positive thing, except when it's achieved at the expense of a successful emotional life. The Libra woman may suffer because of this and feel abandoned, which would only reinforce her need to find some kind of emotional alternative outside of the relationship.

Despite dedicating little time to family life, Capricorn may end up holding his partner's flighty behavior against her. Feeling betrayed, Capricorn can then become aggressive, even violent.

In order for the relationship to last over time, the Capricorn man must learn to reassure his partner, and not hesitate to show her from time to time that she is an important part of his life. He will have to force himself to express his feelings more often in order to improve their communication. As for the Libra woman, she should not demand an overwhelming optimism or a hectic social life from her partner. She will have to accept his nature and accept him as he is.

The 6 Most Incompatible Couples of the Zodiac: Best to Avoid Them!

Some people live in perfect harmony for years,…

The 6 Most Seductive and Deceitful Signs of the Zodiac

Who knows if at some point you may meet one of…

The 4 Most Manipulative Zodiac Signs

I'm sure that in your life you have dealt with…

The Worst (and Most Difficult) Couples of the Zodiac

The 4 Most Cruel and Vindictive Women of the Zodiac

Many times, we come across personalities that are…

The 4 Signs That Give the Most in a Relationship

There are some zodiac signs that are more…

How Each Sign Behaves When They Fall in Love

The Zodiac Sign You're Most Compatible With in Bed

While we'd like to be guaranteed that sex is…

All relationships, if not nurtured, eventually…

What kind of man will fall in love with you according to your sign?

When it comes to love, astrology has the answer…

Who is Your Ideal Partner According to Your Zodiac Sign?

The zodiac partner you're most compatible with is…

What Kind of Friend Are You According to Your Sign?