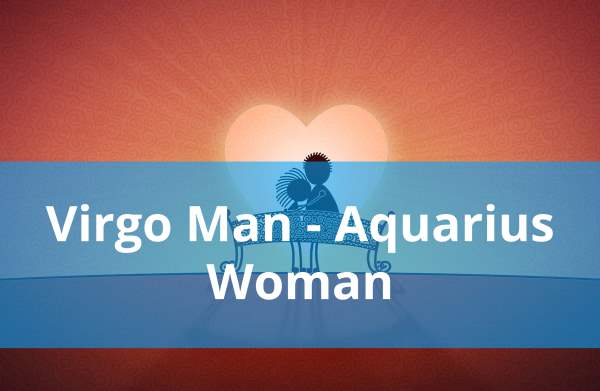 Be very careful because this relationship is dangerous. The Virgo man and the Aquarius woman are entirely different beings, although everything is possible in love...

From the first encounters between the two, the Virgo man is captivated by the Aquarius woman. He admires her freedom of expression, her mental acuity, her sophistication. As for the Aquarius woman, she is more than charmed by Virgo's discreetness. This reserve makes her wonder a lot about who this secretive man is deep down and whether he's hiding something. But she doesn't need to worry; he's only hiding a lot of tenderness and love.

In the relationship, things are not so clear, as neither of them tend to make things clear from the beginning. They go with the flow. She only dreams of freedom while he clings to his day-to-day life. This notable difference will generally become a source of tension between these two. They may sometimes even have difficulty living together.

The Virgo man finds it difficult to understand his partner's need for independence. He usually tries to control her or change this desire for autonomy. He tries to make her not miss this independence when she's with him. And this is exactly what you should never do with an Aquarius woman. Nonconformist and idealistic, she finds it difficult to tolerate the morality and rigidity of her partner on a daily basis. She may suffer a lot in the future if she tries to adapt and settle for the life Virgo dreams of, a life that is not the one she wants.

Despite all of this, both can find a certain balance, although it will be necessary to make certain sacrifices on both sides. In addition, with these compromises, both will increase the ways they complement each other, which are already many.

The Aquarius woman usually brings a lot of joy and originality to the relationship. As for the Virgo man, he keeps Aquarius with her feet on the ground, keeping her from straying too far from reality.

Both will be able to use their respective qualities to face the difficulties inherent in life as a couple. Virgo's sense of responsibility combined with Aquarius's optimism will be enough to solve most of the problems that arise in this relationship.

The 6 Most Incompatible Couples of the Zodiac: Best to Avoid Them!

Some people live in perfect harmony for years,…

The 6 Most Seductive and Deceitful Signs of the Zodiac

Who knows if at some point you may meet one of…

The 4 Most Manipulative Zodiac Signs

I'm sure that in your life you have dealt with…

The Worst (and Most Difficult) Couples of the Zodiac

The 4 Most Cruel and Vindictive Women of the Zodiac

Many times, we come across personalities that are…

The 4 Signs That Give the Most in a Relationship

There are some zodiac signs that are more…

How Each Sign Behaves When They Fall in Love

The Zodiac Sign You're Most Compatible With in Bed

While we'd like to be guaranteed that sex is…

All relationships, if not nurtured, eventually…

What kind of man will fall in love with you according to your sign?

When it comes to love, astrology has the answer…

Who is Your Ideal Partner According to Your Zodiac Sign?

The zodiac partner you're most compatible with is…

What Kind of Friend Are You According to Your Sign?